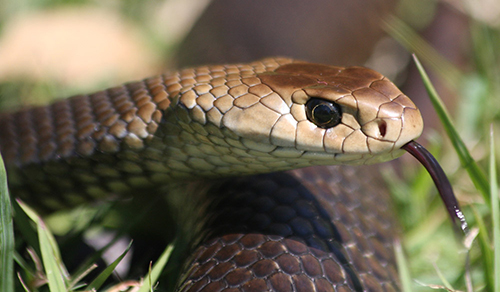 As the weather really starts to heat up, so too does the activity of our reptilian neighbours. Canberra’s plentiful nature reserves and close proximity to bushland means that even in suburbia we are living in close quarters with many species of snakes, including some of Australia’s most dangerous – the Eastern Brown Snake, Tiger Snake and Red Bellied Black, as well as many non-venomous species.

As snakes emerge from their winter hibernation and become more active, the venom yield in their bites is often much higher as they have often not fed for months, making the severity of their bites much worse.

Most snake bites occur when we enter into their territory and either step on or startle them or they are attacked by dogs, they are not naturally aggressive but their defence can be deadly.
If you suspect that your pet has been bitten by a snake, always take it to your veterinarian immediately to have it checked as signs of envenomation vary widely depending on species of snake, venom yield in the bite and activity levels of the pet. Some signs will present shortly after envenomation, some will take hours. These can include (in no particular order):

The signs may appear to improve and you may think that your pet is ok when in fact this often indicates a lethal dose of envenomation. Especially with snake bites, if your pet does require antivenom, sooner is always better, so don’t waste time, jump in the car and get your pet to the vet as quickly as possible.

The best advice is never to pursue a snake to confirm its identity, even if you suspect that your pet has been bitten by it, your veterinarian can perform a Snake Venom Detection Test to work out which species it is and what the best treatment is. If you do find a snake, leave it alone and it will usually move on. If you do need the snake to be removed, please contact ACT Wildlife rangers on 13 22 81. Avoid snakes wherever possible and encourage children to tell an adult immediately if they see one.